Just the smell of certain strains of marijuana can make you smile and relax. Others can make you wrinkle your nose. The effects of the aroma can seem almost as intoxicating as ingesting the substance. From light florals to heavy diesel smells, marijuana aromas swirl in the air as you luxuriate in the head, body, and soul experience of your favorite strains. But, what gives your cannabis that aromatic essence? Several compounds in the marijuana plant create the smell, taste, and look of the plant. Cannabis cultivators use these various chemicals to produce specific properties in marijuana plants that cause effects users, like yourself, look for. One of the main types of substances the cultivators used are called terpenes.

What are Cannabis Terpenes?

One of the significant compounds used in essential oils, terpenes, is most commonly derived from plants, including teas, herbs, and, of course, cannabis. Terpenes can also be found in animals. Terpenes are essentially found in an animal’s egg yolk, fish scales, and feathers.

Terpenes created in unique combinations are what give plants their fragrance, taste, and appearance. A plant’s terpenes are also a way to protect itself from predators or to attract insects for pollination.

We value terpenes for their therapeutic and medicinal purposes. They are in spices, teas, and essential oils we use every day. Two of these spices are Curcumin and Thyme. Curcumin is a much-loved spice in Indian dishes. It boasts a wide range of healing qualities but is best known as an anti-inflammatory and pain reliever. Thyme is another spice routinely used in our cooking. Therapeutically it has both antibacterial and antifungal properties.

Teas we drink for their healing qualities include green, Rooibos, and Turmeric. The terpenes in these teas are known for their anti-inflammatory, analgesic, and calming characteristics.

There are also a wide variety of terpenes found in marijuana. Cannabis terpenes are similar to the more well-known compounds of THC and CBD. Like these main chemicals, marijuana terpenes have various therapeutic attributes that include analgesic, anti-anxiety, and anti-inflammatory properties.

Marijuana strains are divided into two categories, Indica or Sativa. These two groupings are based on the type of hybrid-traits the plant has, including taste and aroma, and what effects a strain has on the user. Typically, Indica strains give the users an all-over body relaxation. Sativa strains are known for their energizing, creative highs. The taste, scent, texture, and effect a strain gives goes way beyond the Indica vs. Sativa division. What variety of marijuana terpenes are in a particular strain and whether that terpene is primary or secondary is the real reason a strain is Indica or Sativa.

Terpenes are the properties that create your favorite marijuana strain. With the wide variety of aromas, tastes, and textures, you can enjoy everything from the subtle wave of joy to the over-whelming relaxation of “couch-lock.” With so many to choose from, there is a cannabis happy place for every user.

Pinene- This compound is commonly derived from the resin in pine trees. Like trees, in other plants, it also has that wonderful outdoorsy, earthy aroma. As a therapeutic remedy, it can be used as an anti-inflammatory, anti-bacterial, and bronchial dilator. Haze Berry, OG Kush, and Blue Dream tend to have a higher amount of the cannabis terpene, Pinene.

Humulene– This is another outdoorsy, woodsy scent. Two main medicinal uses for this compound are as an appetite suppressant and an anti-inflammatory. Humulene terpenes can be found in marijuana strains such as Gelato, Atlantis, and Sour Diesel.

Limonene– With its bright, citrusy scent, Limonene’s aroma is a mood elevator. Its uplifting qualities help to reduce anxiety and depression. Another therapeutic property is as a digestive aid. This compound is found in Wedding Cake, Quantum Kush, and Berry White.

Myrcene– Be prepared if you use a strain of marijuana with this terpene. It’s known for an overall body relaxation, also known as “Couch-Lock.” Another fundamental property is the ability to enhance absorption through the skin and to also increase the number of cannabinoid substances in the brain. More cannabinoids in the brain give the user a sense of euphoria. The scent is an earthy, clove-like smell. Marijuana strains with this terpene include OG Kush, Girl Scout Cookies, and Grape Ape. Myrcene is also a chemical in hops, the major component in beer.

Borneol- This terpene has a minty aroma and flavor with an unusual underlying metallic tone. Its medicinal qualities include uses as an anti-inflammatory and an analgesic. You can find Borneol in cannabis strains such as K13-Haze, Golden Haze, and Amnesia Haze.

Phytol-With flora tones, this marijuana terpene gives the user a sense of relaxation. It’s often used for its sedative and anti-anxiety properties. Another of its therapeutic qualities is as an anti-inflammatory. This terpene can be found in the underlying tones of Sour Diesel, Blue Dream, and the marijuana strain Cheese.

Eucalyptol. The aroma of this terpene is a cooling menthol, minty scent. It has both anti-bacterial and anti-fungal properties. It is a secondary component of the marijuana strains Girl Scout Cookies, AC/DC, and Headband.

Sabinene-Although not one of the most common cannabis terpenes, this strain has a unique peppery or spicy scent. Many users say it smells like pumpkin pie or reminds them of the holidays. Although this terpene should be used in small quantities, its medicinal uses include anti-bacterial and antioxidant properties. One of the main strains it’s found in is Super Silver Haze. 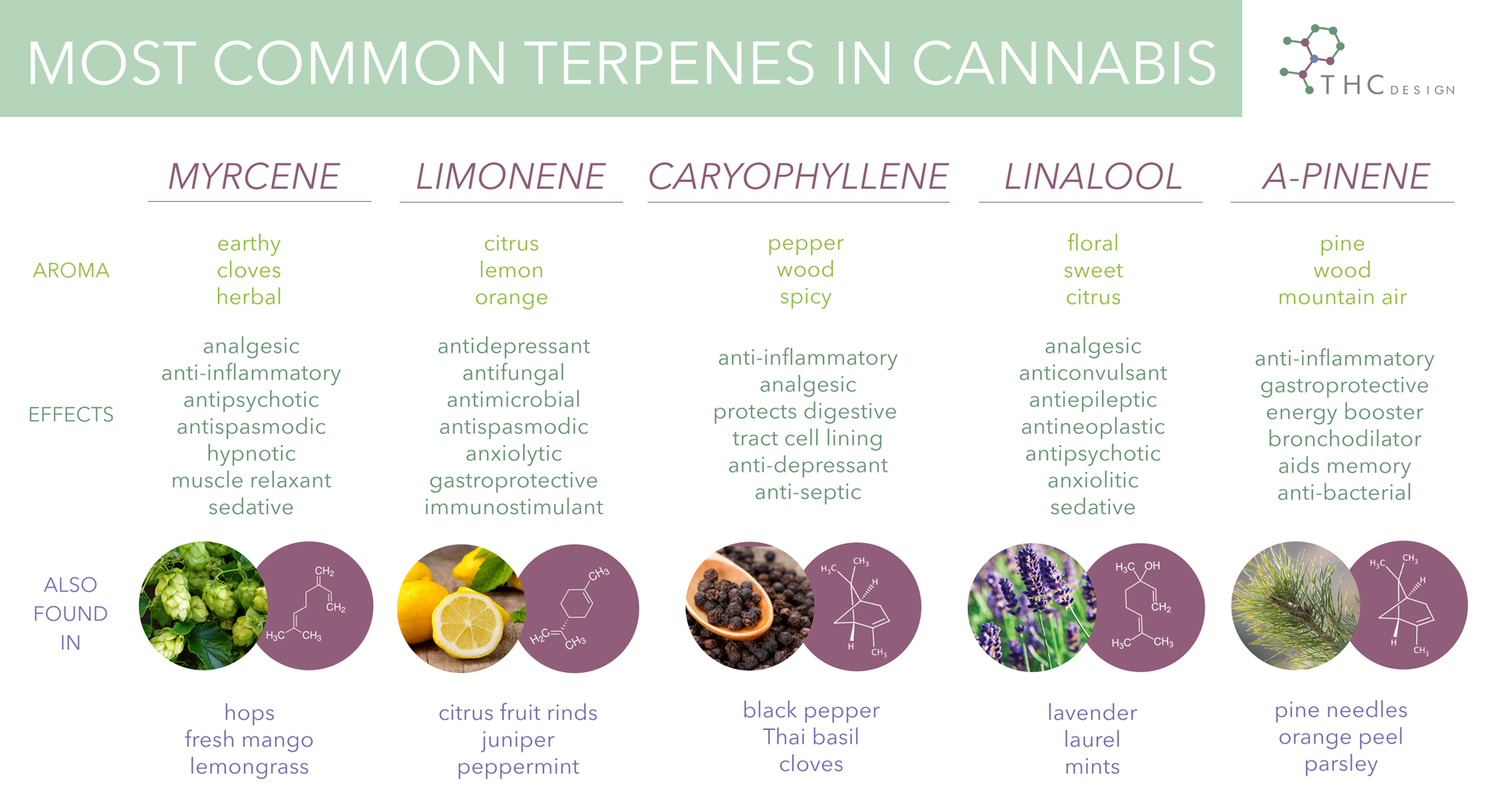